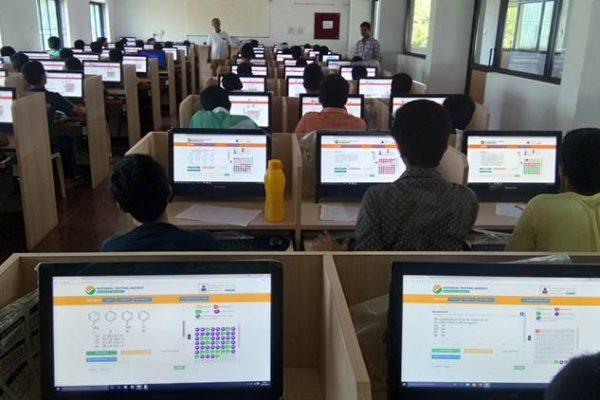 The National Testing Agency – NTA will hold JEE Main in the month of January  and April  to give a fair chance to all the students according to the latest announcement by MHRD. JEE Main will be a fully computer based test (online) There will be no change in syllabus and exam pattern.

Sets and their representation; Union, intersection and complement of sets and their algebraic properties; Power set; Relation, Types of relations, equivalence relations, functions;. one-one, into and onto functions, composition of functions.

Fundamental principle of counting, permutation as an arrangement and combination as selection, Meaning of P (n,r) and C (n,r), simple applications.

Integral as an anti – derivative. Fundamental integrals involving algebraic, trigonometric, exponential and logarithmic functions. Integration by substitution, by parts and by partial fractions. Integration using trigonometric identities.
Evaluation of simple integrals of the type
Integral as limit of a sum. Fundamental Theorem of Calculus. Properties of definite integrals. Evaluation of definite integrals, determining areas of the regions bounded by simple curves in standard form.

Cartesian system of rectangular co-ordinates in a plane, distance formula, section formula, locus and its equation, translation of axes, slope of a line, parallel and perpendicular lines, intercepts of a line on the coordinate axes.
Straight lines
Various forms of equations of a line, intersection of lines, angles between two lines, conditions for concurrence of three lines, distance of a point from a line, equations of internal and external bisectors of angles between two lines, coordinates of centroid, orthocentre and circumcentre of a triangle, equation of family of lines passing through the point of intersection of two lines.
Circles, conic sections
Standard form of equation of a circle, general form of the equation of a circle, its radius and centre, equation of a circle when the end points of a diameter are given, points of intersection of a line and a circle with the centre at the origin and condition for a line to be tangent to a circle, equation of the tangent. Sections of cones, equations of conic sections (parabola, ellipse and hyperbola) in standard forms, condition for y = mx + c to be a tangent and point (s) of tangency.

Statements, logical operations and, or, implies, implied by, if and only if. Understanding of tautology, contradiction, converse and contrapositive.

The syllabus contains two Sections – A and B. Section – A pertains to the Theory Part having 80% weightage, while Section – B contains Practical Component (Experimental Skills) having 20% weightage.

Work done by a constant force and a variable force; kinetic and potential energies, work-energy theorem, power.
Potential energy of a spring, conservation of mechanical energy, conservative and non-conservative forces; Elastic and inelastic collisions in one and two dimensions.

Centre of mass of a two-particle system, Centre of mass of a rigid body; Basic concepts of rotational motion; moment of a force, torque, angular momentum, conservation of angular momentum and its applications; moment of inertia, radius of gyration. Values of moments of inertia for simple geometrical objects, parallel and perpendicular axes theorems and their applications.
Rigid body rotation, equations of rotational motion.

UNIT 7: PROPERTIES OF SOLIDS AND LIQUIDS

Propagation of electromagnetic waves in the atmosphere; Sky and space wave propagation, Need for modulation, Amplitude and Frequency Modulation, Bandwidth of signals, Bandwidth of Transmission medium, Basic Elements of a Communication System (Block Diagram only).

UNIT 21: EXPERIMENTAL SKILLS   Familiarity with the basic approach and observations of the experiments and activities:
1. Vernier callipers-its use to measure internal and external diameter and depth of a vessel.
2. Screw gauge-its use to determine thickness/diameter of thin sheet/wire.
3. Simple Pendulum-dissipation of energy by plotting a graph between square of amplitude and time.
4. Metre Scale – mass of a given object by principle of moments.
5. Youngs modulus of elasticity of the material of a metallic wire.
6. Surface tension of water by capillary rise and effect of detergents.
7. Co-efficient of Viscosity of a given viscous liquid by measuring terminal velocity of a given spherical body.
8. Plotting a cooling curve for the relationship between the temperature of a hot body and time.
9. Speed of sound in air at room temperature using a resonance tube.
10. Specific heat capacity of a given (i) solid and (ii) liquid by method of mixtures.
11. Resistivity of the material of a given wire using metre bridge.
12. Resistance of a given wire using Ohms law.
13. Potentiometer Ã¢â‚â€œ
(i) Comparison of emf of two primary cells.
(ii) Determination of internal resistance of a cell.
14. Resistance and figure of merit of a galvanometer by half deflection method.
15. Focal length of:
(i) Convex mirror
(ii) Concave mirror, and
(iii) Convex lens
16. using parallax method. Plot of angle of deviation vs angle of incidence for a triangular prism.
17. Refractive index of a glass slab using a travelling microscope.
18. Characteristic curves of a p-n junction diode in forward and reverse bias.
19. Characteristic curves of a Zener diode and finding reverse break down voltage.
20. Characteristic curves of a transistor and finding current gain and voltage gain.
21. Identification of Diode, LED, Transistor, IC, Resistor, Capacitor from mixed collection of such items.
22. Using multimeter to:
(i) Identify base of a transistor
(ii) Distinguish between npn and pnp type transistor
(iii) See the unidirectional flow of current in case of a diode and an LED.
(iv) Check the correctness or otherwise of a given electronic component (diode, transistor or IC).

UNIT 1: SOME BASIC CONCEPTS IN CHEMISTRY

Rate of a chemical reaction, factors affecting the rate of reactions: concentration, temperature, pressure and catalyst; elementary and complex reactions, order and molecularity of reactions, rate law, rate constant and its units, differential and integral forms of zero and first order reactions, their characteristics and half – lives, effect of temperature on rate of reactions – Arrhenius theory, activation energy and its calculation, collision theory of bimolecular gaseous reactions (no derivation).

UNIT 11: CLASSIFICATON OF ELEMENTS AND PERIODICITY IN PROPERTIES

UNIT 12: GENERAL PRINCIPLES AND PROCESSES OF ISOLATION OF METALS

General Introduction: Electronic configuration and general trends in physical and chemical properties of elements across the periods and down the groups; unique behaviour of the first element in each group.

Group – 14
Tendency for catenation; Structure, properties and uses of allotropes and oxides of carbon, silicon tetrachloride, silicates, zeolites and silicones.

Group – 17
Preparation, properties and uses of chlorine and hydrochloric acid; Trends in the acidic nature of hydrogen halides; Structures of Interhalogen compounds and oxides and oxoacids of halogens.

Group -18
Occurrence and uses of noble gases; Structures of fluorides and oxides    of xenon.

General introduction and classification of polymers, general methods of polymerization – addition and condensation, copolymerization; Natural and synthetic rubber and vulcanization; some important polymers with emphasis on their monomers and uses – polythene, nylon, polyester and bakelite.